On backorder, place an order to reserve


Terrawagen Mercedes Sprinter 2019+ LED Front Grille Emblem is not available from any retailer until 12/30/2022. We recommend reserving your place in line and the manufacturer will ship as soon as they can!

The Terrawagen Mercedes Sprinter LED Front Grille Emblem is a super simple installation; simply connect the custom designed wiring harness into the headlight! No need to wire this into a switch!

Terrawagen Mercedes Sprinter 2019+ LED Front Grille Emblem ONLY works with the chrome grill that has the removable center star emblem; if your Sprinter was one of the high-end models that came with LED headlights, you most likely have the correct grill. If you cannot simply and easily remove your OEM emblem by turning it counterclockwise, you cannot use our Terrawagen Mercedes Sprinter 2019+ LED Front Grille Emblem.

Terrawagen is based in Portland Oregon. Owner Eric Didier has always been a car fanatic and vans have always been in his family, starting with a Volkswagen van owned by his father purchased new in 1969. Terrawagen started by producing clever accessories for the Vanagon, and then expanded to the Sprinter market. VanLife is in Eric Didier's DNA!

What a cool added touch to my Sprinter. This was a super easy installation and adds that extra special look at night. Highly recommend Nomadic Supply, quick shipping and the install video was helpful 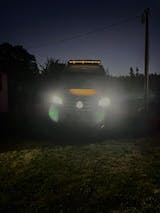 Thank you so much Mychal!! We appreciate you and this rad review!

WARNING: This product may expose you to chemicals which are known to the State of California to cause cancer, birth defects or other reproductive harm. For more information go to P65Warnings.ca.gov.

Over 100 products are on sale while supplies last!. Dismiss